I'm winding down after a productive sabbatical leave and of course summer's waning days. I should be working on that new course preparation (yikes, I'm teaching in a week!), but I wanted to say something about trends in recent months (and years) connected to Big Data in the media and science.

It strikes me that the original instantiation of big data is meta-analysis. Isn't it the goal of meta-analysis to pool all the relevant data into one analysis? Yes. So literally every meta-analysis could claim to be the biggest dataset qualifying on a subject. I've been doing meta-analyses for nearly 30 years and one thing that always attracted me was the increased statistical power I could wield because I was capitalizing on the law of large numbers: As available observations increase, statistical trends regulate and inferences become surer. An approach embracing big data should in theory bring one closer to the truth, other things equal. (Of course, they are not necessarily equal: Data can vary in quality, etc.)

In contrast, the term big data is usually reserved for massive pools of internet-gathered webhits and the like, although usually not merged from independent studies. Gapminder is essentially a big data approach, tracking nation-level data. Those data in turn are gathered from quasi-independent surveys that other bodies such as the UN or the World Bank collect. (One could argue that databases spanning many economic and social surveys are essentially a meta-analysis, whenever temporal trends are examined, though they are rarely if ever described that way.)

Google is essentially a mammoth (viz. BIG) database, optimized for your text searches. The same for Google Scholar. These can be used as a quick means for gauging temporal trends. From the figure below, you can see that meta-analysis is ever more popular in the last 21 years, leaving the 2013 figure unadjusted (only about 8 months have passed so far this year). 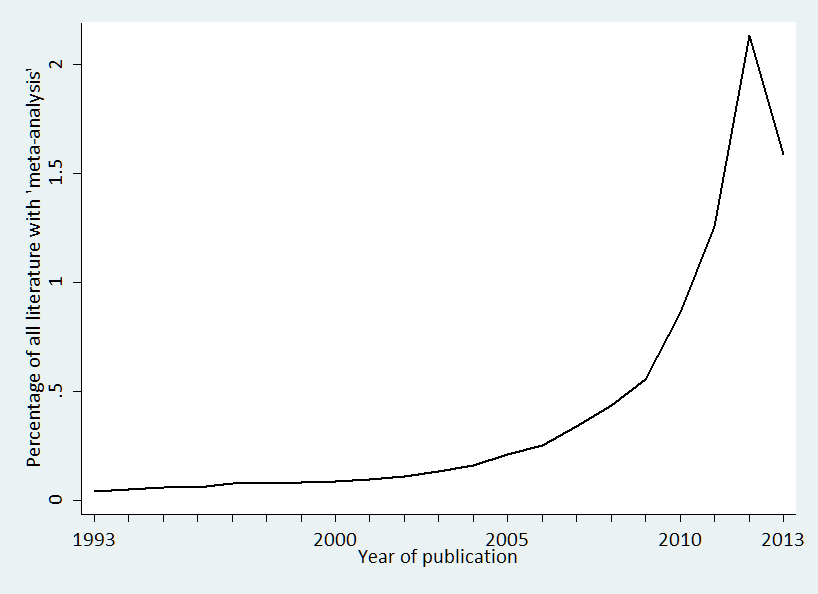